Otherworldly, complex and trance-inducing sounds manifested by the power of the human voice, carrying the emotional weight of centuries of pride, poverty and oppression; polyphonic vocal music is a living tradition in Albania and in 2005 was proclaimed a Masterpiece of the Intangible Heritage of Humanity by UNESCO.

Hysni (Niko) Zela, often superguest of the choir, is the most prominent representative of the distinctive styles of southern Albania, where the drone can be sung either continuously or rhythmically against the interlacing melodies and occasional wild or mournful cries of the other voices to weave a haunting web of shape-shifting, dissonant beauty.
Niko has been performing for over 40 years, touring internationally as a member of the Albanian National Ensemble, with his own ensemble and as a guest singer with the Fanfara Tirana brass band. He is awarded by the Albanian Presidency with the most ambitious award for any musician, “Master of Arts”.

Folk Iso-Polyphony is a form of traditional music of Albania. Most of the villages and towns have an iso-polyphony band. “Iso” refers to the drone accompanying the singing. Rendered principally by male singers, it is performed during social events (weddings, harvest feast, funerals, religious celebrations, festivals, etc.). It is practised in the south of Albania and is typical for two large areas: Toskëria and Labëria. If both Tosk and Lab polyphonic songs include ballads, historic songs, lyrical songs, etc, they perform the drone differently. The Tosks perform the drone continuously and sung on the syllable “e”, while the Labs sometimes sing the drone as a rhythmic tone.

Traditionally, iso-polyphony in the southern part of Albania has been transmitted form parents to children, but large-scale migrations due to economic hardship have caused the discontinuation of this mode of transmission.

The Albanian folk Iso-polyphony was proclaimed in 2005, a Masterpiece of the Oral and Intangible Heritage of Humanity. Most of the sigers are part of the Albanian National Ansamble. 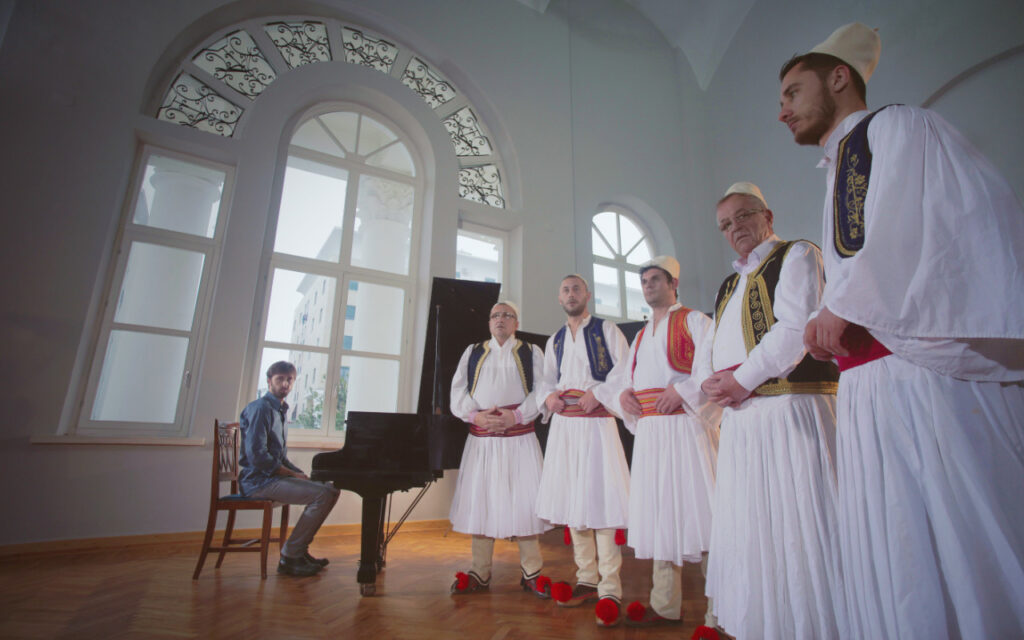 The wonders of Albanian polyphony